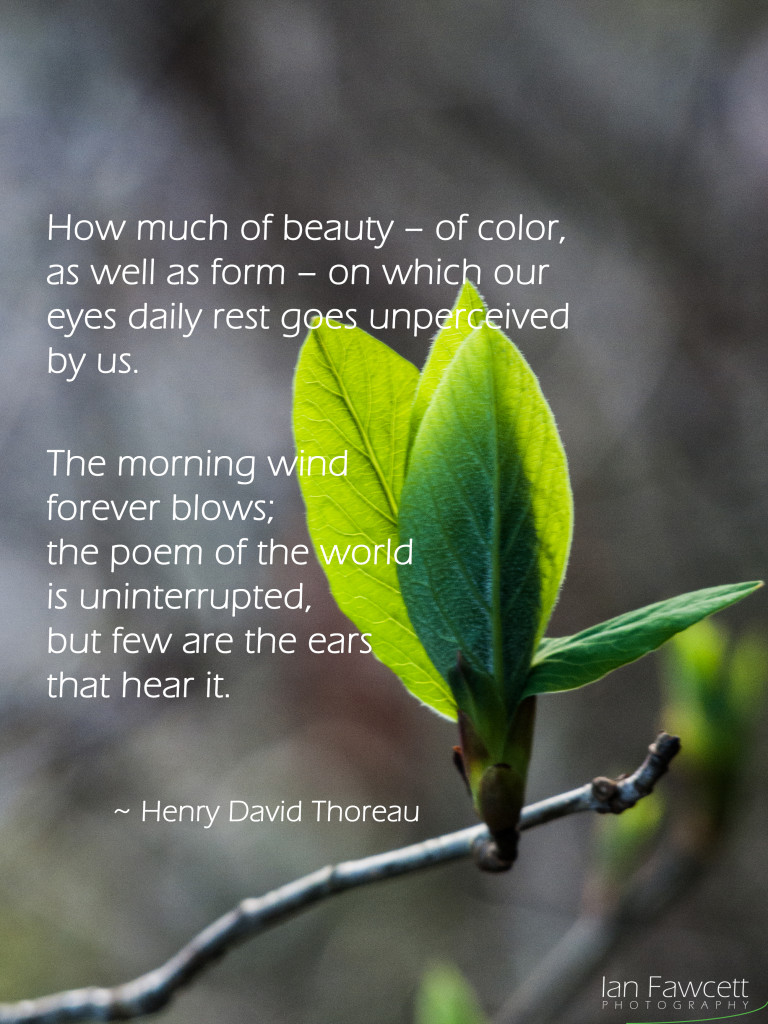 I’ve long been an admirer of Henry David Thoreau.  One of the keenest observers of the natural world ever to put pen to paper, Thoreau has a great deal to teach us about our relationships – with nature, with one another, and with ourselves.

I first became immersed in Thoreau’s writings many moons ago when I found myself working for a year in the Library of the Pacific Biological Station in Nanaimo.  (Yes, this was back when our Federal Government still respected scientific work and its accumulated knowledge held, supposedly in good-keeping, in government-owned science libraries around the country).  I had a year-long contract to compile a comprehensive bibliography on salmonids (salmon and trout and related species).  The idea was to create the first ever computerized database of scientific information detailing everything that had ever been written on salmonids.  It involved locating and gathering materials from libraries and researchers all around the world, assessing the material for its content, and then coding the information on to large computer input forms, the kind with hundreds of tiny little squares that the information had to be written into, one letter at a time, so it could then be keypunched and eventually stored into a huge mainframe computer that took up an entire room.  Yes these were the early days of computers (mid 1970’s) – how much we’ve forgotten what life was like before the internet.  As you can imagine, it was tedious and often mind-numbing work, but which, if it was to have any value at all, had to be done diligently and accurately and painstakingly.  At times, it made my brain hurt.

Back to Thoreau.  It so happened that my desk, in the back corner of the library, was located right next to one of those old, dark, glass-fronted library cabinets that no-one ever dared to open.  This one contained part of the library’s “special collection” of ancient, rare and special-edition books, and on the top shelf were two huge volumes of Thoreau’s Journals.  Almost 2 feet tall, a foot and a half wide, and at least 4 inches deep, these massive tomes were old and dusty and creaky – it seemed like they hadn’t been opened for decades – and they positively exuded the promise of some great insights and secrets.

And so, whenever the tedium of writing letters into little squares got the better of me, I would pull out Thoreau’s Journals and read through random passages.  A couple of things came to light as I read.  The first, that there is also a lot of tedium in someone’s journals – not every thought on every day is of lasting value.  Thoreau, in his meticulous chronicling, had an irresistible desire to count things like the number of nails it took to build his cabin, and to account for every single penny he spent.  Interesting to him, maybe.  But beyond that, his attention to detail also focused on the world around him and he recorded the ever-changing moments with reverence and an intimacy that could only come from a true and abiding connection with nature.  Emerging from those pages was an image of a man very much at peace with himself and his relationship with the world, even though he questioned everything; it was a testament to the value of personal experience, curiosity and intellectual rigor in providing a solid foundation for a good life.  His words had a profound effect on me, and have stayed with me ever since.

Many years later, on a family vacation to New England, we made a point of visiting Concord and, in particular, Walden Pond.  The pond and the surrounding woods had been owned by Ralph Waldo Emerson, Thoreau’s friend and mentor, and were subsequently donated to the state by Emerson’s family.  By the time we visited it was a dedicated National Historic Site, and a State Park – and, as such, had been somewhat sanitized, as many State Parks are, in order to manage the volume of visitors.

Thoreau’s cabin was, of course, long gone, replaced with a replica (not on the original cabin site). There was also a statue of Thoreau (a bit tacky for my liking) and a very crowded swimming area.  Despite these distractions, it still felt – for me at least – to be somewhat of a pilgrimage.  The true value of our heritage, I believe, lies not only in the physical attributes of the place but in the intangibles – the stories and the memories that it carries with it, and the sentiments it evokes.  We walked through the woods, soaking up the spirit of the place, but my favourite spot at Walden was a large pile of stones (at that time, about 20 feet across and 6 feet high) immediately adjacent to the original cabin site.  It was a cairn that had grown organically, pebble by pebble, from the offerings of visitors who, I’m sure, wanted to leave a token of appreciation – not so much for the park, but for the man and what he’d left for us.  I clambered up and placed my pebble on top of the mound, and left feeling as though I’d made a true connection.

On the way back through the town of Concord, we stopped at a used book store where I found a well-used copy of Walden.  It still graces my bookshelf, some twenty years later, and can still evoke the same emotions.