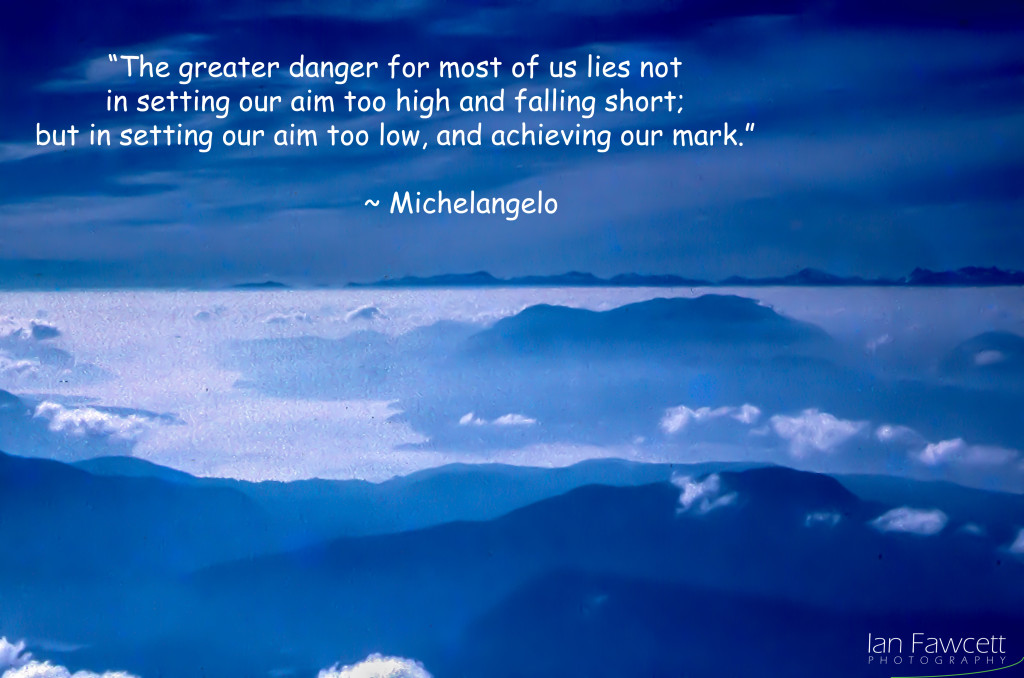 It is said that the sculptor Michelangelo considered it a productive day if there was a pile of marble chips on the floor at the end of the day. I like to think of this as the “Michelangelo Test” for a good day – a day where I have made progress toward my goals. I may not have finished anything, but if that pile of chips is there I can feel good that the day has not been wasted.

This test can be applied to just about everything we do. It can, for example, be the basis of your time management system. Think of those big assignments that you can’t seem to get around to, those tasks that are just so daunting that you don’t know where to start. Think of each of them as a slab of marble that you are going to shape into something brilliant, then make sure that every day you chip away at each of those slabs. Some days you will get more done on one project than on another, but if you try every day to work a bit on each you will ultimately achieve your goals.

I have used this same approach to direct major projects, such as land acquisition campaigns, fundraising and public awareness campaigns, intricate projects such as software development, as well as for daily living chores like chopping and stacking firewood.  It’s universal.  It also allows us to think big – to set our goals and our expectations high, without being overwhelmed and with full confidence that we will be able to achieve them.

I’ve never had a problem with big ideas.  As Michelangelo says, it’s better to aim high than aim low.  That was the approach when I started working to establish The Land Conservancy, twenty years ago.  And it’s the same approach we have now with the National Trust for Land and Culture – we may be starting small and moving cautiously, step by step, but we have a grand vision to build the kind of organization that is desperately needed in Canada (and that is successful elsewhere).

This approach has served us well.  The acquisition and protection of the Sooke Hills (including the Sooke Potholes), the Wycliffe Wildlife Corridor and the Horsefly Riparian Conservation Area, for example, could not have succeeded in any other way.  The Sooke Hills project began with a couple of very small parcels around Ayum Creek, then, over a 15-year period, a multi-million dollar purchase of the Seraphim lands was added, the Sooke Potholes property followed, and finally two massive acquisitions of forest land for park and community water supply purposes.  From the beginning we knew what we wanted the project to look like in the end, but we chipped away one step at a time. We also had to fund raise for this one step at a time. Along the way, there were many who were terrified by the scale of the vision and that fear caused them to oppose it every step of the way.  But in the end, one step at a time, we were able to achieve what many said was impossible.

On a smaller scale, chopping and staking firewood, or working on a massive computer software project, I use the same approach. When I have had one of those days when too many distractions, too many necessary tasks have forced me to put aside the important tasks, I get a certain amount of satisfaction from chopping and stacking firewood for even 20 minutes and then working on software for 20 minutes – a few chips of marble – keeps me moving ahead.  Michelangelo got it right!