He gestured for me to sit down, across the table from him, on one of the kitchen chairs. He was a man of about 50 years. He was pretty drunk. His voice was slurred. On the table was a nearly empty bottle of scotch. Problem was that he was gesturing with a 357 magnum.
It was about 2:00 pm and I was alone. On this day in 1969 I was working Day shift in a one-man ‘West Car’. There were only 4 uniformed officers and a Sergeant on that day, plus a Cadet who staffed the dispatch. We had three patrol cars on the road, myself on the West, a Centre Car with two officers and an East Car with one. The call had not indicated a weapon. Something about a depressed husband. When I arrived his wife greeted me at the front door, she had obviously been drinking. She gestured at the kitchen and said ‘he’s in there”. So I had foolishly walked in.
Once in the room I didn’t have a lot of choice. I sat down. 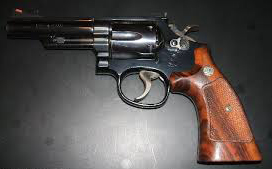 No portable radio of course and cell phones had not been invented. No backup unless the dispatcher or Sergeant started to wonder what was happening and then I was not sure I wanted to be disturbed by the arrival of the cavalry.
So began a conversation which went something like this. “Hi. I’m Bill. What’s your name?” The man with the gun replied “Sid” “Well Sid, what’s the problem?” For the next twenty minutes we talked about Sid’s experiences in the Canadian Army. The gun never left his hand. He gestured with it but there was no aggression. Much of the time it was pointed right at me.
Sid had been a young man when his unit was sent to Hong Kong at the beginning of the Second World War. His war was short. With the surrender of Hong Kong he became a prisoner of war. He and his fellow Canadians suffered through hell on earth at the hands of the Japanese. When the war ended he and those who had survived were released broken men. Their physical health had been destroyed but even more so their mental health. Today we would call it PTSD, in the 60’s we had no idea. We ran into these veterans a lot. Good brave men but physical wrecks, bitter, full of hate, most drank to extreme. Sid had a job. He worked for the municipality when he was sober. His supervisors cut him some slack because they knew what he had been through. Today Sid was wavering between wanting to die and wanting to live.
He was not sure why he had asked his wife to phone the police. He was not sure why he had not just shot himself. We talked. He told me about his hell, his recurrent nightmares, the memories of his friends who had died.  For most of the time he was swinging that gun around. My risk was that it might go off accidentally or that his mood might turn.
Finally I decided the time was right. I said. “Sid. How about you let me have a look at that gun. It looks like a better gun than we get issued (it was)”. Sid said “Sure” and passed it to me – the mood had changed.  I took the gun carefully. Opened the cylinder and dumped the six 357 cartridges into my hand. Next question. “Sid do you have any other guns?” Sid insisted he didn’t have any more. His wife had been watching I guess because she came into the room and confirmed there were no more guns.
Sid had decided he wanted to live. He thanked me for the visit. His wife said he would be okay. There was not much more I could do here. I said “Sid. I’m going to take your gun with me I don’t think it is a good idea to have it around do you”? Sid agreed. Five minutes later I was out there.
I returned to the office, submitted a report and turned the gun over to the Exhibits officer. My intention was to have the gun disposed of and a prohibition on owning firearms issued on Sid.
About two weeks later I was called into the Sergeant’s office. It seemed that Sid wanted the gun back. He had even hired a lawyer to represent him. He contended I had no right to seize the gun. That Sid had been too drunk to know what I was doing when I took the gun. I protested. We met with the crown prosecutor but all to no avail. We were forced to return the gun to Sid.
Sid stayed out of trouble at least as far as the police were concerned. I did see him from time to time on the road crew and occasionally stopped to talk. Eventually I lost track and he must have retired. One of the many broken men victims of the Pacific War. I wish we could have helped him more. There were really no resources and we had no training. Drunks were just drunks. We could empathize but we could not really help them. In those years we had many incidents with these fine men who were trying to build their life again. They did receive a reasonable amount of support from Veteran’s Affairs for their physical health, but there seemed to be nothing for their mental wounds which were by far the worst.
(Sid was not his real name).

Some people have taken this article to mean that we did it better back then than now. That we handled mental health better then. Nothing could be further from the truth. Today responding officers would have a portable radio and a cell phone. More important the dispatcher would set a ‘timer’ and would check if the officer had not given the all clear after an agreed time. Also today officer would likely be wearing a protective vest, might have a tasser and mace. Equipment can make a difference, so can training. Training on dealing with mental health situations is increasing. The kind of situation I found myself in can still happen. It can happen in the biggest city or in small detachments in remote areas. I was amazingly lucky. Sid might have killed me, whether by accident or intent. I was also foolish to walk into the situation without knowing what was waiting for me. Every day police officers around the world encounter situations just like this and in 99.99% of the situations the end is good, no one is hurt. Police officers respond with compassion and in search of a solution. There is no magic solution. Sometimes police officers are lucky, sometimes they are not and sometimes someone is killed or seriously injured. When a life is lost, the police officer is always the victim, whether or not she is the one who is shot. No one who has ‘not been there’ can really judge the decisions made in a split second that can haunt you for your lifetime.