Christmas 1972 was fairly typical for me.  At the time I was a Constable assigned to the Community Liaison and Traffic Section of the Saanich Municipal Police.  The job of the section involved a combination school liason work and traffic enforcement.  I was working for Sgt. Bill Chisholm and did mostly administrative work and support.   I was terrified of speaking to a classroom of children.   (I eventually got over that fear). But Christmas was different.   In Saanich we tried to allow as many as possible to spend time with their families.   Our plan was always to arrange the shifts so that while some were working, others on shift could be with their families, in uniform and on call for immediate response if needed.    Members of the Community Liaison and Traffic Section, joined with the Patrol Division so that there were actually extra people working on Christmas, but that the shifts were split with half of the crew spending the first 4 hours on-call with families then the second half taking their turn. Thus I found myself on the 4pm to midnight shift on Christmas 1972.  I drove our only unmarked traffic unit, a Dodge Dart (it would be a ‘Tango” unit in modern terms) and I handled the usual Christmas calls  until 8:00 pm when I went to my mother’s home to join my wife and daughter and about a dozen other family members who had already eaten the turkey dinner and opened presents.   They were waiting for me with a huge meal and pile of presents.   This was our daughter’s first Christmas and she was pretty much dazed by the festivities. 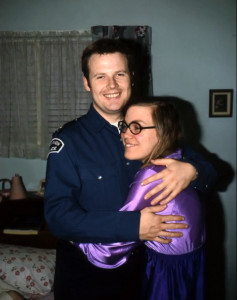 I had been in the house for about 30 minutes, taken off my equipment belt, hat and tie (required uniform then) and settled in when the phone rang.   Dispatchers were given our phone numbers when on-call because we did not have portable radios. There was an ambulance call in an apartment building only blocks from my mum’s house.  The Saanich Fire Ambulance was responding to an attempted suicide but I was by far the closest unit.   I grabbed my gear, said goodbye to the family and ran out to the car.  About 3 minutes later I arrived at the apartment, and a minute after that I found myself on the floor struggling with a drunk, and despondent, male in his 50’s who was covered with blood, had done a sloppy job of cutting his wrists (missed the arteries) and was slashing out with his knife.   He had met me at the door with his flashing knife.   He did not want to be ‘saved’.  The two firefighters were right behind me with the stretcher and supplies.   None of us had portable radios.   They dropped their gear and between us we managed to subdue our ‘victim’ enough to allow me to get handcuffs on him.     We then managed to strap him onto the stretcher and load him into the ambulance. There was no choice but to ride with the firefighter in the back of the ambulance to keep our victim from damaging himself, the ambulance and the crew still further.    We delivered our patient to Royal Jubilee Hospital about 9:00 pm.    The hospitals did not have ‘security’ in those days, so I was required to remain in the Emergency Ward while nurses and doctors worked on our patient.   Eventually he started to sober up, they were able to repair his damaged arms and by about 2:00 am sedate him.       I was free to leave, but of course had no car.   The midnight shift sent a car and by 3:00 am I had picked up the Tango unit and returned to the office.  Paperwork finished about 3:45 and home by 4:15 am.   Uniform a mess and covered with blood.    Wife and daughter, who had waited at the family party until about midnight, now home and fast asleep.     Another Christmas come and gone.   You don’t talk about these things when they happen and you rarely ever talk about the details, the flashing knife, the slippery blood.   Occasionally I bump into those firefighters (now long retired) and we share it, we are the only ones who really can. Not a big deal really, but a more or less normal Christmas for first responders the world over.